C-lok is a simple diverless subsea structural connector that is activated using a single hot stab operation from a standard 3,000 psi Workclass ROV. The device is offered in three basic capacities. The C-lok 900 offers the highest load connector capacity, the C-lok 300 mid range and the C-lok 150 is for lighter duty applications. The patented C-lok technology   for all three is  described in the notes below.

The C-lok Connector provides robust and reliable resistance in all 6 degrees of freedom.

This system is operable at any water depth and  may be activated  at any pile penetration depth so pile refusal has no influence on the connector capacity.

This permanent connection is available over the full range of API standard diameters and well beyond.  C-lok may be released permitting equipment/structure recovery and re-engaged later.

C-lok is available in a wide variety of capacities to suit the application and operated using standard ROV interface in both ROT and ROV ‘Fly to Place’ formats. Should a diver operated version be required these are also available on request.

The C-lok is a field proven  Lloyds Register of Shipping approved design.

C-lok is the general purpose connector for all subsea tube to tube structural applications. Equally suited for  multi-pile (post driven)  and monopile (pre and post driven) arrangements. It is also ideal for attachment of subsea structural modules where release and recovery of the module is either a planned or contingency event.

C-lok is a fully adaptable and patented clamp connector  that not only offers the widest range of fully diverless ROV based applications  but is also available in a diver assisted alternative.

Conventional oil and gas subsea structures  have submerged self weight in the region of 50 Te to 150 Te. Allowing for  typical  operational and environmental loads the  maximum pile loads for a four pile structure will often range from 30 Te to 80 Te and for  extreme environmental loads and fishing interaction may increase to 100 Te. For a nominal operational capacity of between 100 Te and 120 Te the C-lok 150 is available.  For more onerously loaded subsea structures  the C-lok 300 is available. For the highest loaded structures or for typical monopile connections the C-lok 900 is typically recommended.

Conventional Clamp Technology
Conventional subsea flanged clamp connections utilise axial strain in threaded studs or bolts to maintain the clamping loads . This strain energy provides the clamping force and the performance of the clamp relies entirely on maintaining this initial strain. Conventional clamps have an inherent weakness in that they remain susceptible to system ‘losses’ throughout their design life. The strain losses result from small relative movements at the micron level occurring at the contact faces. Such losses are due to a wide range of effects including embedment of the surfaces, thread deflections, radial expansion of the nut, burr flattening, surface irregularities, material loss and creep. Typical designs for threaded studs call for applied tension in the region of 70% of the stud material yield strength. A typical clamp length of say 150mm would rely on a clamping strain in the region of (0.7. L.SMYS)/E = 0.25mm. This 0.25 mm initial strain is the margin between development of full clamping friction resistance and zero. The loss or reduction of this essential stud pre-load has, in the past, led to loosening of the clamp and subsequent parting or fatigue failure of the components. Similarly clamps relying on multiple fasteners are highly prone to loss of strain due to incorrectly applied sequential tensioning operations. Although simultaneous tensioning is typically preferred this is extremely difficult to achieve using diverless technology.

C-lok Clamp Technology
By contrast the C-lok system utilises the elastic bending deformation of both the clamp elements and the clamped tubular during the single 100% load application. This elastic deformation for C-lok is dependent on design but is typically in the region of 10 to 20mm. Thus should even the full 0.25mm losses occur this would represent less than a 5% loss in connector capacity. The maintenance of the strain or spring energy is therefore assured and susceptibility of the clamp load due to losses will always be negligible. The C-lok system is not only inherently safe and reliable it is a simple and quick solution using the single load application that is fully verifiable using both direct hydraulic pressure readings and simultaneous independent deformation measurement.

C-lok Locking Systems
The C-lok is offered in a range of modes depending on connector capacity load requirements. The heart of the C-lok is the Permanent Clamp Unit (PCU) that includes the internal collar and movable pad along with a load retaining (locking) device. The C-lok (wedge version) is in ROT format utilising a self- activating wedge that lowers incrementally as the clamping load is applied. As a result this requires no secondary ROV locking operation as the applied clamping load is retained incrementally as it is applied. The C-lok delivers the clamping load via a removable hydraulic tool called the RRU (Removable Reaction Unit). The RRU incorporates both hydraulic system and a load delivery frame that engages with PCU (Permanent Clamp Unit). The device is self-aligning and is recovered to the surface using vessel assistance.

The C-lok (locking pin version) is by contrast a ‘fly to place’ system. This version has a lighter tool allowing workclass ROVs (Class III) to deploy and recover the tool after connection engagement. The C-lok 300 and 150 may be deployed directly whereas the C-lok 900 uses an integrated buoyancy unit. In all cases the ROV lift capacity (manipulator) requirement is in the range of 60 kg submerged weight.

C-lok Hydraulics
Common to both ROT and ‘fly-to-place’ tool is a single hot stab operation using the 3000 PSI standard ROV supply. The hydraulic system delivers an intensified pressure (max 20,000 PSI) that pushes the thrust rod and shaped pad against the pile in a self-aligning process. This deforms the pipe to within well controlled tolerances with movement recorded using the graduated scale scribed on the end of the self-activating wedge plate (this deformation is measured by the number of pin rotations for the Locking Pin version). The ROV interface panels are identical for both tools types as are the hydraulic components. The hydraulic cylinders vary in size to suit the intended duty. The analogue pressure gauge on the tools directly confirms the delivered clamp pressure and the measured wedge movement or pin roations provides a verified means of confirming the connection has been 100% successful.

Uniquely Releasable
The C-lok may be released, if called for, using a simple reversal of the engagement process after which the RRU may be lifted off the PCU and recovered to the surface.

The C-lok may be activated on shore in a simulation of the connection procedure using a Site Integration Test (SIT). These may include both functional and or load tests.

Units are fabricated, adjusted and machined prior to leaving the workshop. Each unit is subject to a complete FAT and optional load tests before shipping

All components, including control interface operators are detaile designed in house to ensure a robust offshore and in place performance 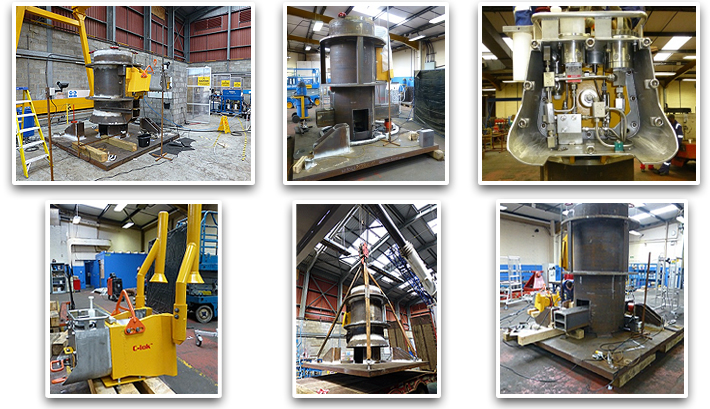 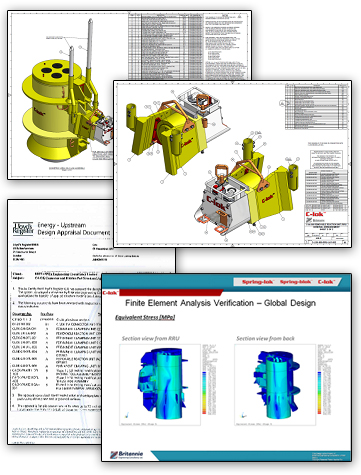 The following procedure is based using a C-lok 900 (wedge version) on a preinstalled pile with a monopile connector incorporated into a Manifold Support Frame Structure: 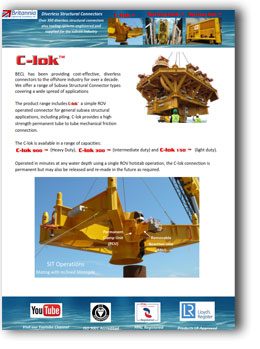 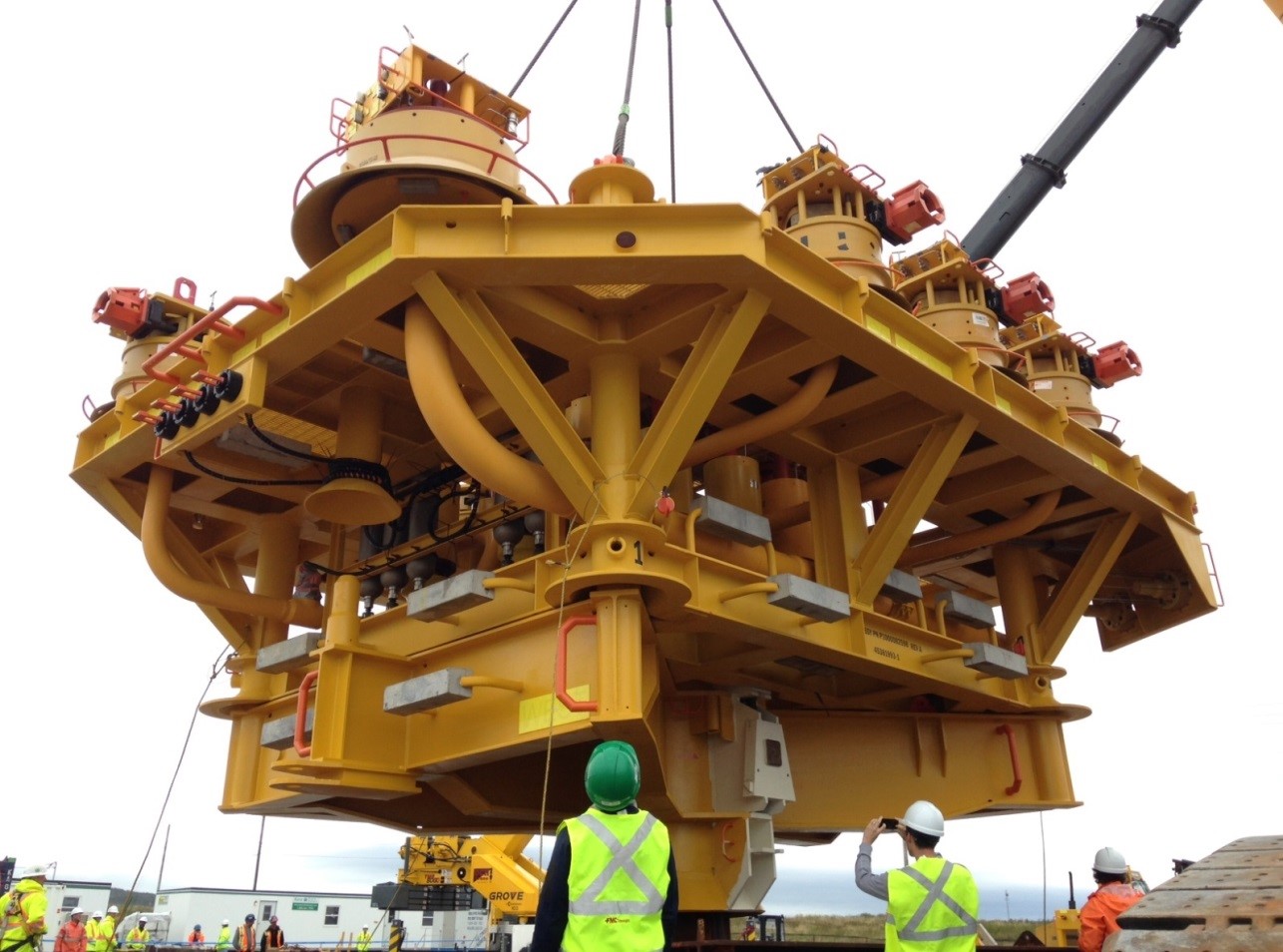 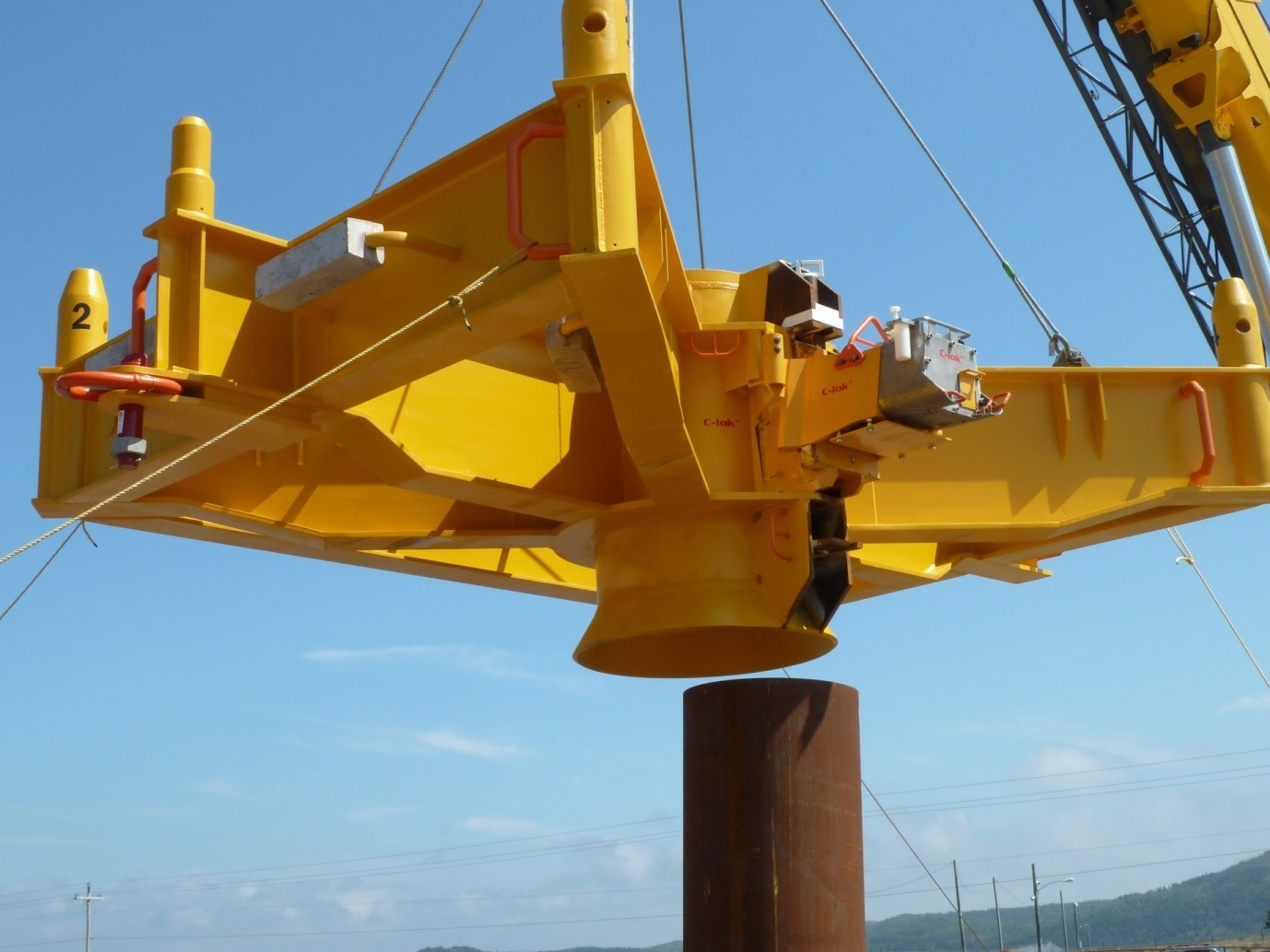 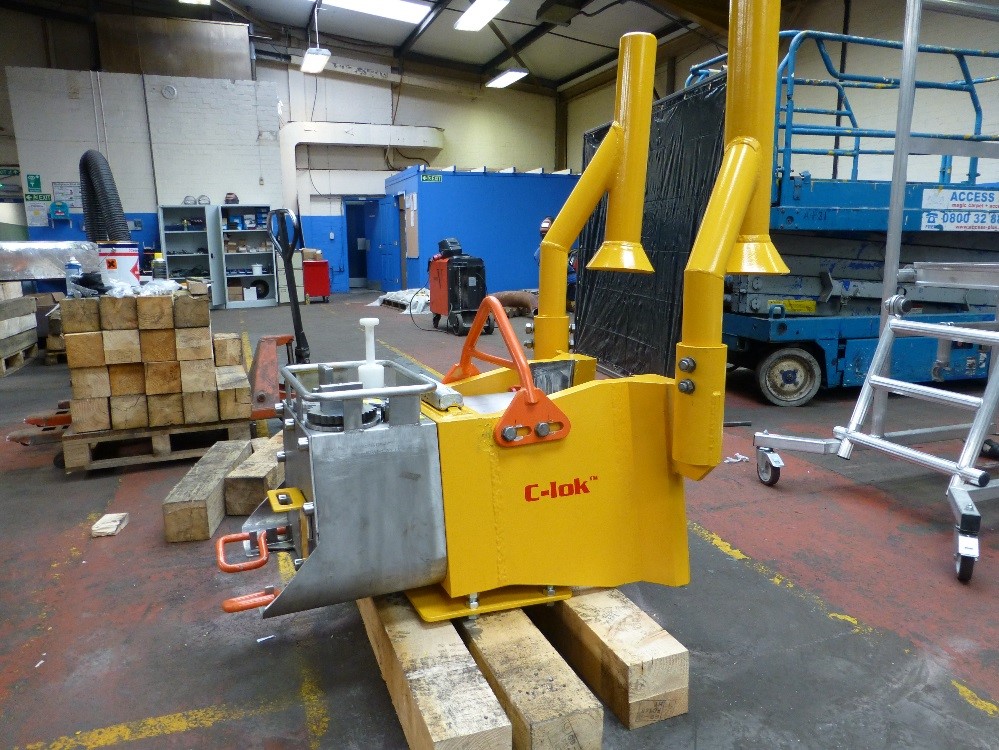 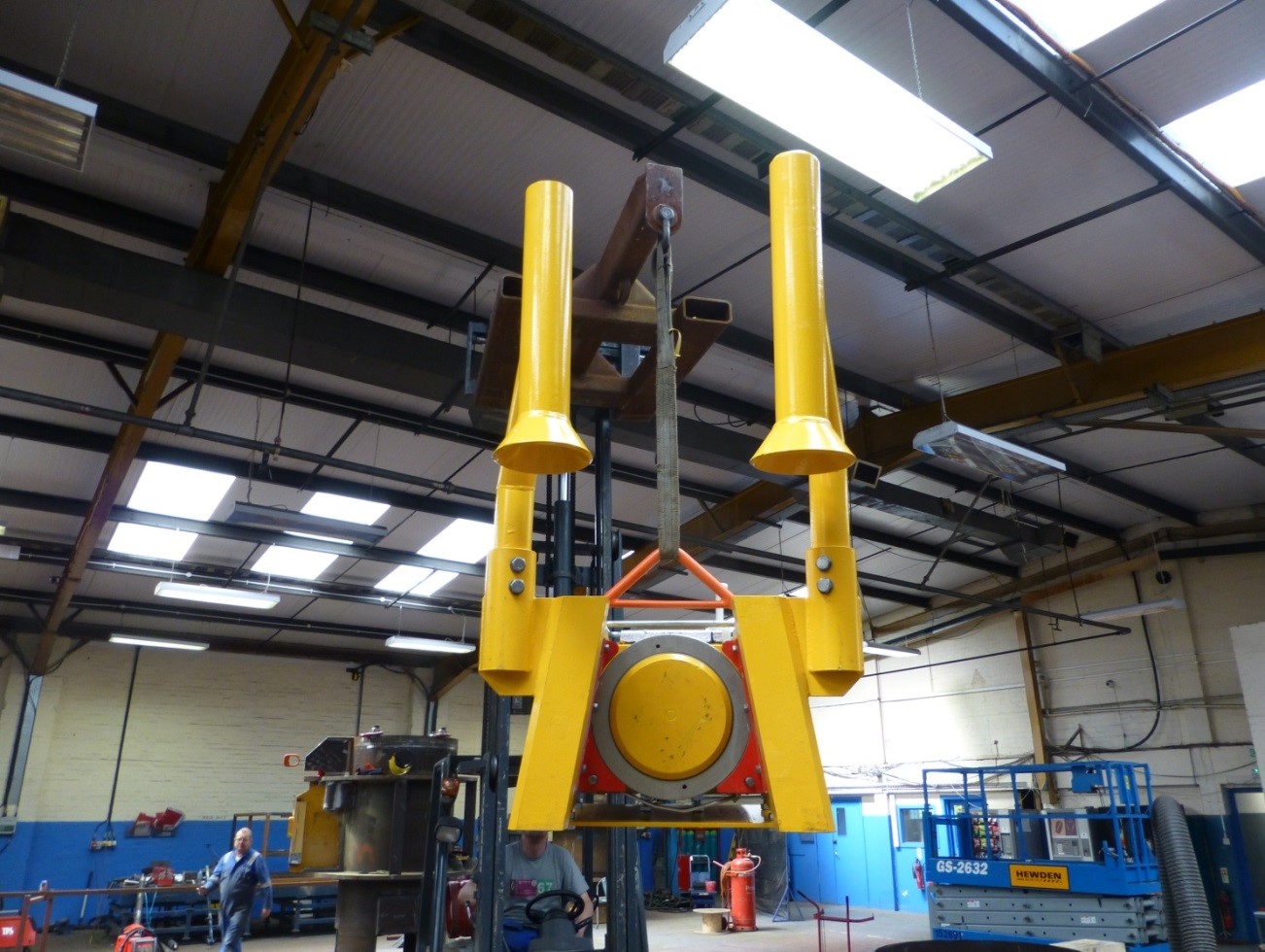 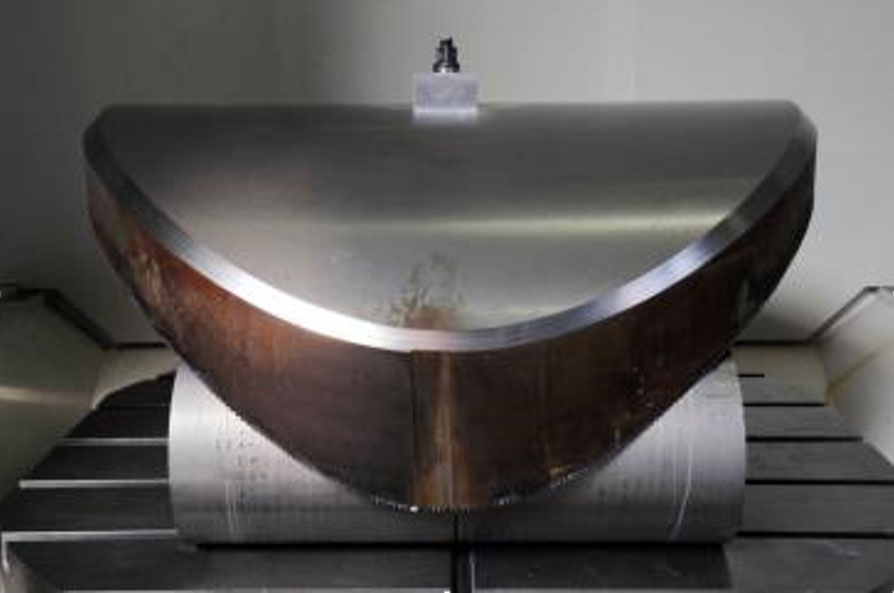 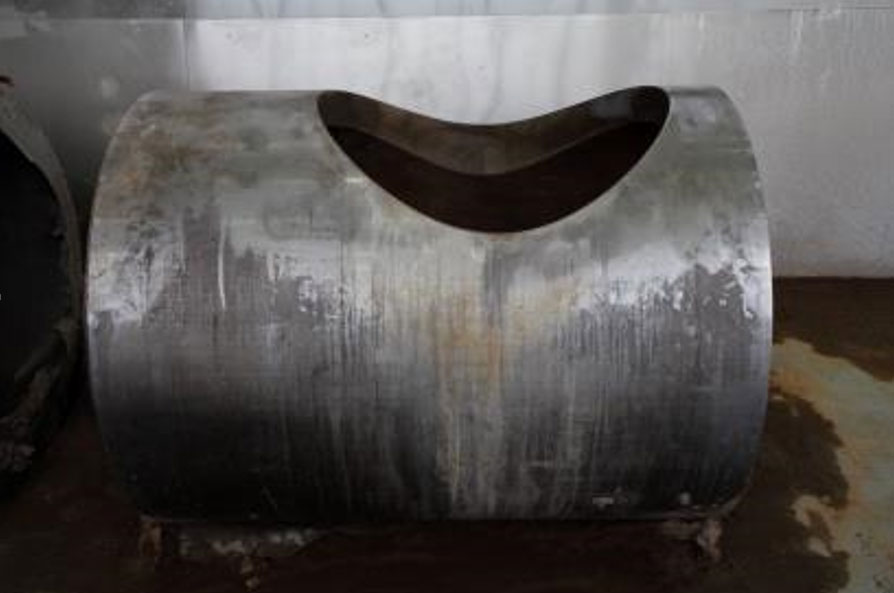 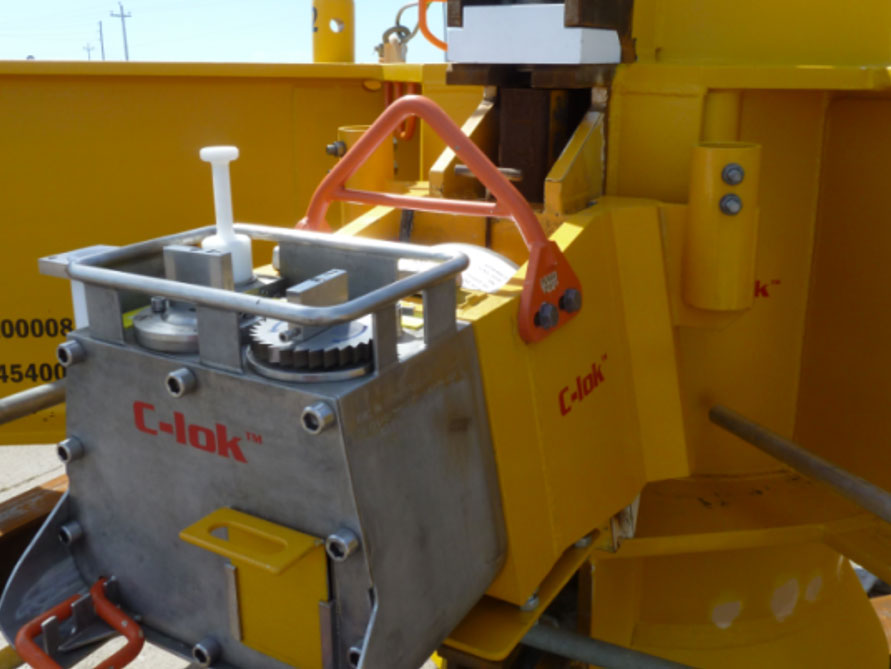 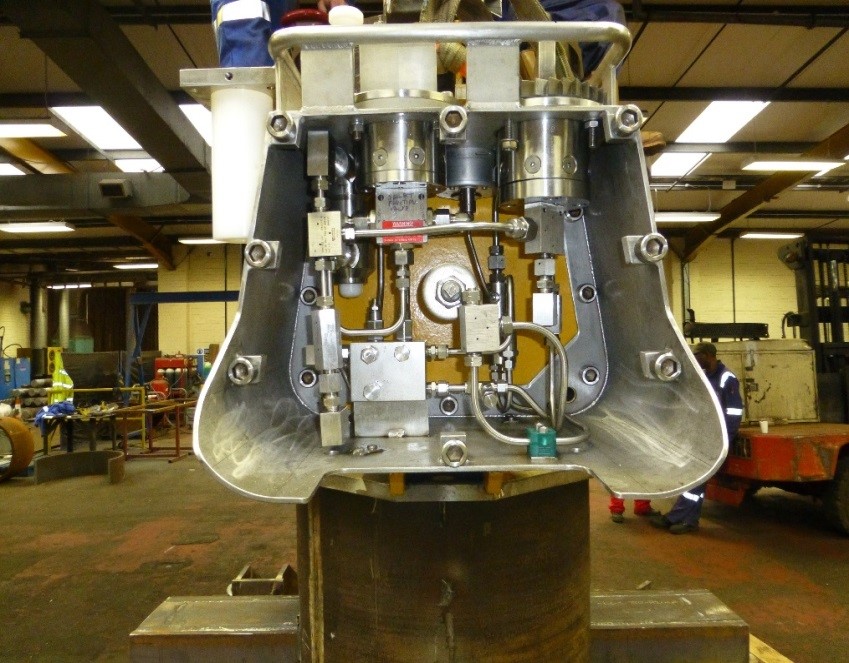